A Look at Louisville’s Latest (and Surprising) Traffic Crash Stats

When it comes to auto accidents, good news rarely arrives without bad news tailing behind. Indeed, Louisville’s latest crash statistics are a mixed bag, with a few uplifting strides overshadowed by an overall increase in accidents and injuries.

Car crashes remain a leading cause of serious injury and death in our state, so we see our fair share of heartbreaking headlines. Especially frustrating is the fact that so many of these accidents are entirely preventable.

Driver negligence is responsible for more accidents in Kentucky than any other contributing factor. Stated differently, the overwhelming majority of car crashes would not happen if drivers behaved more responsibly. That’s a tragedy.

How do we fix it? Understanding the problem is the first step. Fortunately, Louisville has an impressive field of city-specific data available, which empowers us to design solutions at a local level while the state tries to address its own statewide car crash problem.

We take a look at the latest Louisville figures below. 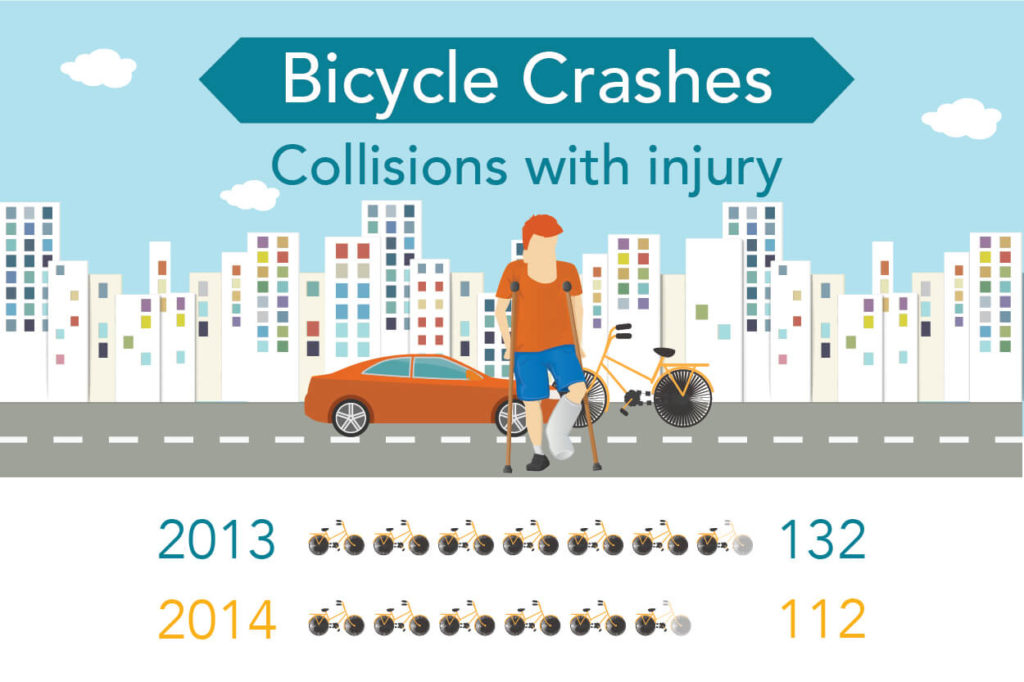 Let’s start with some good news! The number of Louisville bicycle accidents declined significantly this year, dropping from 189 in 2013 to 168 in 2014. (As data takes a while to compile, 2014 is the most recent year on record and its results were only recently released.)

Just as importantly, fewer bike accidents resulted in injury (down from 132 to 112). The fatality rate, meanwhile, remained constant at one death per year. That’s still entirely too many, though city leaders would likely point out that those numbers are dramatically better than many other cities of our size. This is quite surprising considering Kentucky was recently ranked second to last for bike safety

With Pedestrian Accidents in Louisville, There’s More Than Meets the Eye

As for pedestrian accidents, the numbers are a bit harder to read. Overall, the number of accidents increased, but only by three — from 386 to 389.

That sounds bad and, without question, any increase at all is less than ideal. But when we take a closer look, there’s some cause for optimism. Even with an increase in the total number of pedestrian accidents in Louisville, the number of injuries declined by six (from 318 to 312, meaning that the decline in injuries was double the increase in total pedestrian collisions). Fatalities also fell by one, from 15 to 14.

For those inclined to glaze over numbers (we understand!), the takeaway is this: Louisville’s pedestrian situation may actually be getting modestly better. While there’s been a small uptick in accidents, a meaningfully smaller portion of those resulted in serious injury or death.

Of course, any pedestrian death is heartbreaking, and the majority could have been avoided with a combination of careful driving, street-smart pedestrian safety, and state/municipal efforts to crack down on pedestrian-endangering behaviors.

Auto Accidents Go Up; Deaths and Drunk Driving Go Down 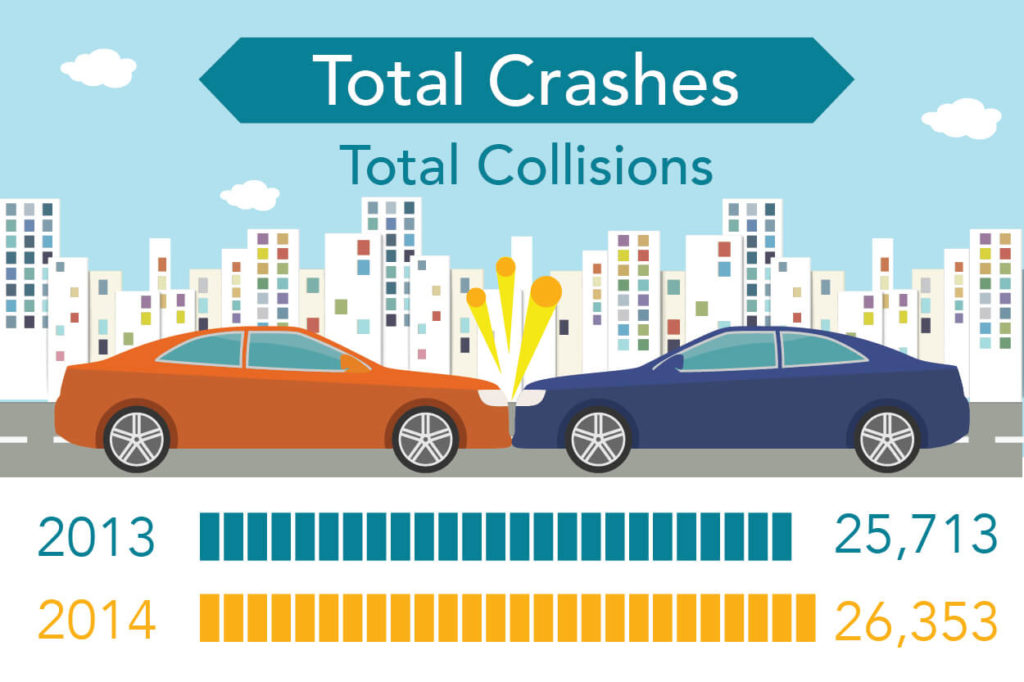 The auto accident picture is a somewhat grimmer one, but the trends are still a bit of a jumble. 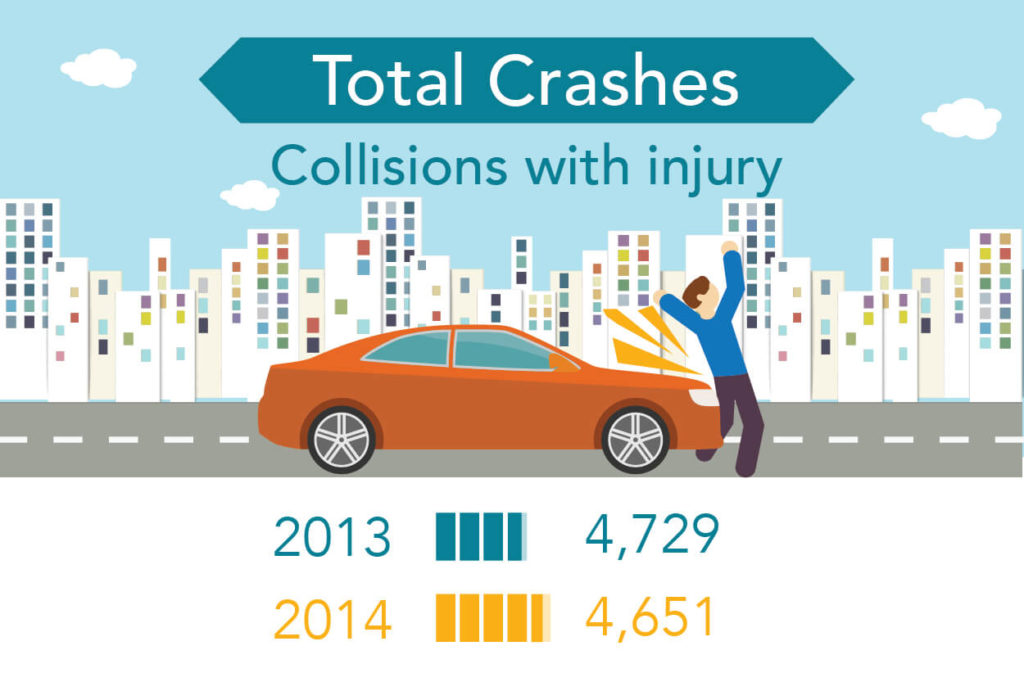 It’s surprising to see a single city experience hundreds more accidents in a given year but also more than a hundred fewer injuries and fatalities. Drunk driving might have something to do with it. DUI collisions fell from 859 to 835. We know that drunk-driving accidents are among the deadliest and most catastrophic. With fewer drunk drivers comes diminished calamity.

A Trend of Safer Streets?

So what do we make of the numbers as a whole? The probable answer, unfortunately, is that it’s too early to tell. Two years do not a trend make, and the recent improvements would likely need to continue before they can support any inference of a real pattern of change.

This much remains crystal clear: auto accidents are a very serious, often-deadly danger in Louisville and throughout the entire state of Kentucky.

If you or a loved one has been injured in a car crash in Louisville — whether as a driver, passenger, pedestrian, or cyclist — the attorneys at Meinhart, Smith & Manning can help. Contact us for a free consultation today.

Louisville’s Most Dangerous Areas for Communters