Your Rights as a Cyclist in Louisville 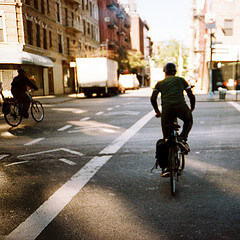 Do you remember as a teenager, eager to get your driver’s license, everyone telling you incessantly that you must follow the “rules of the road?” Those rules are the responsibilities and right those drivers in Kentucky receive when they receive their licenses.

Even though bike riders do not take road tests nor have eye exams or a written test, just by getting on a bike and riding the streets and roads of Kentucky entitles them to certain rights and imposes on them certain responsibilities.

In Kentucky, bike riders must follow regulations that apply to motor vehicles with the following exceptions:

The City of Louisville has its own local regulations for bicyclists and motorists. These include:

Riding a bike in cities can be dangerous. The 2012 Louisville Metro Health Status Report issued by the Kentucky Department of Health reveals that just in Louisville, there are nearly 170 bike crashes in the years between 2001 and 2010. Also, as many as three people die from the accidents that occur between bicycles and cars annually. Contact a Louisville bicycle accident lawyer.

When Rights are Abused

Negligent drivers often overlook cyclists. These negligent drivers either disobey traffic laws or violate the bike rider’s rights. When they do, accidents happen that can injure or kill the bicyclist.

In Louisville, when a biker is on the right of a car, drivers often fail to look to see if the bike lane has traffic in it. The driver makes a right turn and cuts off the bicyclist causing the biker injury or even death. The driver failed to obey the law and violated the biker’s right to expect to be safe in the bike lane.

On a narrow one-way Louisville street, a cyclist is riding on the right side of the road (as the law requires). There is a car behind that attempts to pass even though the street is too narrow. He forces the bicyclist to jump the curb and run into a fire hydrant – the rider flies off the bike and sustains serious injury or even death. In this case, the driver failed to observe the bicyclist’s right to share the road.

If You Have Been Involved in an Accident

Being involved in an accident while on a bicycle can be a nerve wracking and traumatic experience. Coming in contact with 100+ pound vehicle while riding your bike with little protection is a scary experience. It is important that you know your legal rights well. After an accident you will most likely be filled with adrenaline, try to to calm down and remember these steps:

Settle Down: When your body is filled with adrenaline it can be difficult to know if you are injured. Take some time to settle down and assess any injuries you may have.

Call the Authorities: If you have been injured at all it is best to call an ambulance. Failure to take medical attention at the scene of the accident could prevent you from getting compensation for your injuries later.

Get Witnesses: Try to find individuals, other than the one that hit you, who have seen the accident. Hopefully, they will be able to notify authorities of what happened during the accident.

Get Information: Take the drivers information, get information from witnesses, take picture of your injuries and damage to your bike. All the information you can gather will help if you need to seek compensation.