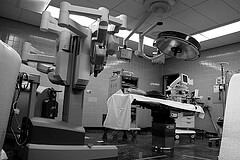 With the advent of new technology, there is a steady increase in the number of robotic surgeries performed on hospital patients across the country. In far too many cases, the physicians in charge of the surgery are not trained properly in the robotic surgery process.

The medical training for robotic devices such as the da Vinci Surgical System, or ZEUS robotic surgical system usually consists of only a weekend training session which is clearly inadequate. It’s important for the surgeon to be proctored and/or supervised by an experienced robotic surgeon during a reasonable number of cases before being allowed to operate. Unfortunately, many hospitals only require an inadequate number of supervised robot cases to ensure surgeon competence.

Changes in State Laws can Hamper Your Ability to File Suit

The injured party must be able to present scientific proof, or an expert witness to substantiate that the emotional injury he/she suffered is greater than injury an individual is reasonably expected to endure in any given set of circumstances. The Supreme Court’s decision on the physical impact rule (or even touching) may make it easier for some emotional injury claims that would not have been previously allowed. On the other hand, the expert testimony requirement may complicate and/or restrict certain emotional distress suits.

The Kentucky courts have been very consistent in reviewing punitive damage awards with directives that state setting a fixed standard for punitive damages is difficult. Certain specific guidelines have been formulated by the courts.

If Something Goes Wrong, Who takes the Blame?

If the robot arm breaks and injuries the patient, who’s responsible? Some devices, designed and developed for single use are reprocessed and presented as quality devices that meet the original device. Not true.

The single use products are plastic — polyethylene, and some polyurethane. As an example, what happens when a device is designed, cleared and tested on a 510(k) with gamma sterilization and a reprocessor sterilizes the reprocessed device with ethylene oxide? If things go wrong, who’s at fault?

If you have  questions such as these or any medical injuries questions, you need to consult with the highly skilled malpractice legal counsel at Meinhart Smith & Manning to maximize the potential award and seek justice against the negligent.