Periventricular Leukomalacia: Holes in the Brain

Lack of oxygen to the brain can cause all manner of problems, and it can be doubly agonizing when one second too long is the difference between a healthy child and a child with physical or mental difficulties. One of the worst types to deal with is referred to as periventricular leukomalacia (PVL). PVL causes brain damage by affecting the white matter, and can be debilitating. 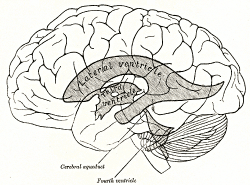 PVL almost exclusively affects fetuses and newborn babies, with premature babies being at even higher risk. The disease attacks the white matter in the brain – the part that transmits to the spinal cord – most commonly around fluid-filled areas called ventricles. Around these ventricles, tissue dies, leaving ‘holes’ – not literally, but pockets of dead tissue where no function is possible. Since the tissue dies, the nerves in that tissue die as well.

There are usually no outward signs of difficulty, but babies who have experienced PVL are prone to disabilities like cerebral palsy and muscular dystrophy. It is very common to have tight, stiff muscles that are difficult to move, especially if the damage is severe – the nerves which control motor movement can be affected. Intracranial bleeding may also occur, which can make any existing brain damage far worse. Despite this, many are unaware that PVL can appear in very mild forms. Even if someone is not profoundly affected, they still may have PVL, and it may be due to someone’s negligence.

Many times, PVL can mimic the symptoms of other diseases, so diagnosis is very difficult. It is diagnosed most commonly by either MRI or via a cranial ultrasound. However, a medical professional must know what to look for. If he or she does not, that can still be persuasive in arguing that the standard of care has been breached.

In terms of treatment, there may simply not be anything that can be done. The symptoms can be managed, but the underlying brain damage is usually irreparable. Individual treatment plans tend to be the most effective, if only because PVL can manifest in such a variety of ways. However, some treatments for adult PVL patients have actually proven harmful to newborns, because the newborn’s brain is still developing and changing. It is imperative that your child’s doctor be aware of which treatments are safe to try. A full medical workup is mandatory, and only when all available information is present should a medical professional make any decisions.

While the onset of PVL may simply occur – there is, for example, a documented period of vulnerability for fetuses between 26 and 34 weeks, where the risk is simply higher – it does occur due to medical malpractice. It is distressingly plausible for a doctor to miss, for example, a trapped umbilical cord, or wait just a second too long to insist on a cesarean delivery for a baby experiencing shoulder dystocia (or otherwise trapped in the birth canal). It is a common defense tactic to insist that this area of medicine is simply too unsettled to establish a firm standard of care, but there are signposts in PVL care that a physician must meet, such as exercising all due diligence to avoid any oxygen deprivation in the fetus.

We Can Help Your Family

Having a disabled child can be difficult both monetarily and psychologically. However, if your child’s injury was due to medical mistake, you may be able to seek compensation. The Louisville birth injury attorneys at Meinhart, Smith & Manning PLLC are experts in medical malpractice, and we will do our best for you. Contact our Louisville office for a free consultation.