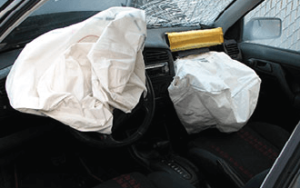 In late February, U.S. regulators approved a fine of $14,000 USD per day against Takata Corporation, a Japanese company responsible for the manufacture and assembly of airbags in many cars on U.S. roads, including those made by Fiat Chrysler, Mitsubishi, BMW, Ford, Honda and others. Takata has allegedly not cooperated with a federal probe into their products’ defective performance, handing over millions of pages of documents, but with no guide or training on how to interpret them correctly. Takata’s airbags have been linked to five deaths, multiple injuries and millions of recalls, and approximately 90% of the recalled cars have not had their airbags repaired as of March 2015. While Takata’s case is a somewhat extreme example of what can happen, it is nonetheless an example of what can happen if a company puts out a defective product. Contact our Louisville product liability lawyers for a free case consultation.

While as of this writing, no official charges have been filed against Takata or anyone connected with the corporation, evidence does appear to indicate that claims would be able to be made against the corporation.

A New York Times report from November 2014 reports that Takata allegedly became aware of potential faults in its airbags as early as 2004, conducting secret testing in that year, though the research was later destroyed. If this report has basis in fact, it could lead to allegations of deliberate fraud, and certainly provide sufficient evidence to allege a failure to warn. If the company had knowledge of the airbags’ tendency to rupture, but deliberately concealed it from the public, such an act might lead to both civil and criminal penalties.

In most states, Kentucky included, there are three major causes of action when bringing a product liability suit: (1) strict liability, (2) negligence, and (3) breach of warranty. Strict liability is perhaps the most rare; it is when liability is imposed regardless of whether someone was consciously at fault – that is, as a matter of law. Breach of warranty is similar to strict liability, except that it is the condition of the product that is the issue, not the actor – in other words, if a seller promises that their product will meet certain specifications, and it does not, they may be in breach of the implied warranty. Negligence, by comparison, occurs when a person or company breaches their duty of care toward their customers due to recklessness or indifference.

Within these causes of action, there are three major claims. All of these can be alleged under a strict liability theory, under a negligence theory, or a theory of breach of warranty. The first is design defect. Design defect means that there is an inherent fault in the way a product was designed that did not occur in the manufacturing process. Usually, this is proven by showing that there was a viable alternative design that would have been safer and just as monetarily feasible to produce.

Lawsuits Against Takata for Injuries

Being injured by a product you thought safe can feel like a betrayal, and in the worst case scenario, it can upend everything you thought you knew. You may be entitled to compensation for your injuries. The Louisville product liability attorneys at Meinhart, Smith & Manning, PLLC have years of experience in product liability cases, and are ready, willing and able to help you get what you need to get back on your feet. Contact our office today to discuss your options.