Failure to Communicate Change in Condition 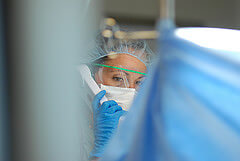 One of the skills people most like to highlight in their resume is “good communication skills.” This is something that is almost always sought after because when a person truly has these skills it can make a big difference when it comes to the quality of work they will be able to do, their ability to limit and manage stressful situations, and even improve the dynamic of relationships.

If you’ve reached our page because you or a loved one has experienced a personal injury due to a medical professional’s failure to communicate, contact our Louisville medical malpractice lawyers to schedule a free initial consultation and case evaluation.

Failing to communicate important information, especially when it comes to a medical condition can have very bad consequences. Failing to communicate a change in a patient’s condition is just one scenario that can result in a gap in care that could potentially cause irreparable damage or even death in a medical setting. As one patient is treated for a single ailment, the responsibility for that person’s care is shared by several people. Maintaining good communication about that person’s condition is vital. How a patient responds to various treatment options can make a big difference when it comes to deciding what the next step should be.

Nurses and mid-level professional, such as Physicians Assistants and Nurse Practitioners are highly involved in a patient’s care, but their ability to follow directions, and to only treat patients to the extent that they are licensed to do so  makes them vulnerable to being named in a medical malpractice suit. A shared study conducted by the Nurses Service Organization (NSO) and CNA, explored a malpractice case where the errors of a nurse played a large role in the treatment of a patient in the hospital. Malpractice of nurses accounts for approximately $87 million in damages. In the cited case, a 28 year old woman came into the hospital because she was in labor and about to have her first child. There had been no problems with the pregnancy, and her labor began just a week before her due date. However, after she had been at the hospital for two hours, she was forced to undergo a c-section due to fetal distress.

The OBGYN delivered the baby, and there were no obvious adverse effects to the mother. Still, the doctor left instructions that accounted for possible red flags, and asked that he be notified if these became apparent. He especially stressed that he should be contacted if her oxygen levels dropped below 95%. The woman experienced the drop in oxygen, and several other uncomfortable symptoms, including uterine cramping, excess discharge, weakness, nausea, and unstable vital signs. The doctor was not notified of complications for four hours. During that time, the nurse also administered the drug Xanax, despite the risk it carried considered the woman’s unstable vitals.

When the doctor arrived, the patient’s blood pressure was extremely low, and an emergency hysterectomy was needed. The surgery resulted in even more complications, including the loss of blood. She was also experienced seizures, and cardiac arrest, which was temporarily remedied with CPR. She had congestive heart failure, fluid in her lungs, brain damage, pneumonia, and respiratory distress syndrome. After 12 days in the ICU, the woman died.

Communication with a Patient and Family

In addition to staying on the “same page” regarding a patient with fellow medical professionals, it is important to properly communicate with patients and their families as well. The reality of a medical situation can be hard to handle, but it is information that patients have a right to know. This knowledge is often beneficial because it can allow families to nurture their connections with one another.

Any time a patient is treated for a particular ailment, they may be seen by several practitioners in multiple settings. including primary care, specialized out patient, emergency care, surgical care, and rehabilitation. Within a single facility, there is also an average of three handoff communications involving a single patient. This communication needs to be accurate, but sometimes it is not. Gaps in communication compromise the continuity of care, and essential information can get lost, putting the patient at risk or medical complications up to and including death.

The Joint Commission in the U.S.A. reported the breakdown in communication was the number one factor in unexpected serious injury and/or death. In Australia, a study was done tracking issues with transferring patients between health care providers. When adverse issues arose, 11% of the time they involved communication issues. Inadequate skills only contributed to 6% of incidents.

Communication problems are not only responsible for causing missed opportunities for quality care, but can also result in providing unneeded care. One woman received a more complex procedure than what was  needed for her irregular menstrual bleeding, Performing the wrong procedure meant that the woman would not be able to get pregnant in the future. If communication issues led you or a loved one to receive subpar care that resulted in injury or death, contact the Louisville injury attorneys at Meinhart, Smith and Manning, PLLC for a free consultation.